how the mill works

The hoist on the side of the building lifts incoming crates of grain to the top story, through the doors at the top. 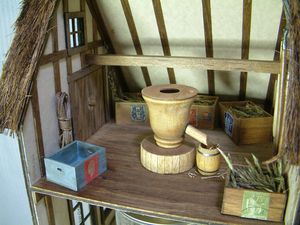 The wheat then falls into a storage bin called a wheat garner on the second story. 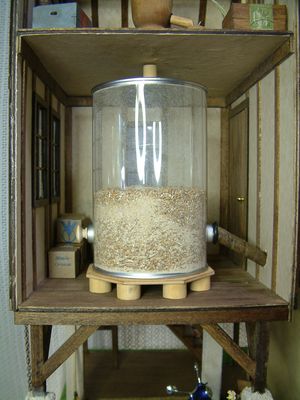 The wheat is fed at a controlled rate from the garner to the millstones on the first floor.

The millstones grind the wheat between two stones.  The top stone is stationary, the bottom stone is turned by gears powered by the water wheel.  The water wheel shaft and the gears are below the bottom story; you can see a glimpse of them in the cut-out in the foundation. 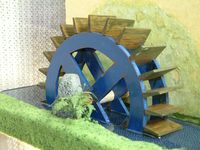 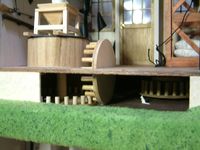 The flour falls out of the elevator's scoops into the hopper boy, which sweeps the grain around, cooling it.  To the left of the hopper boy is a stand with a sifter screen on it, used to manually inspect the quality of the flour.

The large gear on the wall serves no purpose now, it is a remnant of old machinery once used in the building.  The hopper boy is powered by a twisted belt, which rotates the power ninety degrees from the horizontal shaft turned by the grain elevator to the vertical shaft turning the workings of the hopper boy.

Grain leaves the hopper boy down a chute into the bolter.  In the bolter flour passes through mesh panels, sifting it into grades.  Bran, regular flour, and fine flour are dispensed into grain bags, weighed on scales beneath the bolter.

Grain bags are then placed in the storeroom, where they are held until they travel down the dumbwaiter (it really works!) to the ground story, then leave the mill. 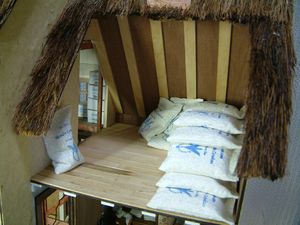 In the room behind the bolter a table with a small scale is where flour dispensed into a barrel is measured into small, household sized bags, then boxed for transfer to the market.

There is only one room in the mill unseen so far - the office, where the bookeeper is working late, after everyone else has gone home for the day. 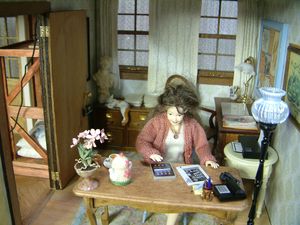 Wait, wait, wait.. YOU did this?! It's incredible! :) A stunning work indeed.. I'm going to take a second look on your pics to admire every tiny detail. This is great! :)
Hugs from Venice

I love it
amazing work
xx

Am literally sitting here with my mouth hanging open like a fool - half because it is just so amazing and half because it's hard to get over the fact that it is miniature, and not an actual working mill that you are showing!

So proud to be your friend!

Susan, you made me blush.

I put links to other entries in the sidebar, be sure to check them out. Especially Baxter Point Villa, La Luciole and Cutty's.

Aw, thanks for the link to my build. I'll get to posting some on my blog once I get through this mound of pics and posts about the villa. I think I'll need another week for all that nonsense.

On to the good stuff...I love your wood work. It's such a warm color with the cream stucco. The thatching looks even more magnificent in the larger photos where you can really see the details. How in world did you know how to build this elaborate mill?!!! I love all the working parts. I dunno the first thing about grain mills, but this looks like it could work to me! :D All of your machinery is clean, well-designed and invokes such a sense of realism. Are those cake decorating bags?!!! I used cake icing tips to make pendant lamps in mini for the Newport kitchen. :D It's brilliant the way you elevated the one addition, and I love the flower pots on the stairs and deck. And, I'm glad you showed us the corkboard and explained its significance since it blends into the background with subtle realism. Love it, my friend, top notch work!

I've never even been in a grain mill, I just did some research online while I waited for the kit to arrive. I found one picture particularly simple and explanatory so I printed it in miniature, it's sitting on the desk, next to the bookkeeper's iPad.

Yes, those are cake decorating bags...well, not the bags, those are scraps of cloth, but the metal tips and plastic collars are. I changed the colors so that one would have to do a double-take to realize it instead of it being glaringly obvious. It worked out okay, I think.

Fabuloso !! Me he quedado enamorada .

This is the only time I've been to your website. Thank you for posting more information.