what I bought at the shows - part four

l've been intrigued by 'squeeze me' shrubbery for a long time, and seeing and feeling it in person cinched it for me...I bought three small bushes and four small trees from A Little More in Miniatures.  I got the rake from Diane Burger. 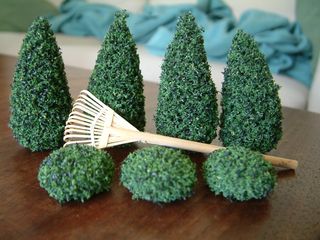 One of my favorite booths at the IMA show was potter Jason Feltrope's.  I wanted to buy one of everything, but came home with two beer steins, a jar, four bowls and a modern style teapot. 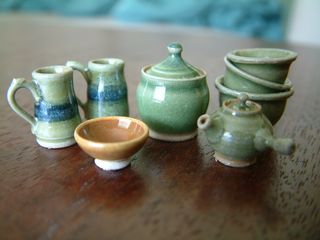 I fell in love with this antique grill sold by picker Patricia Wehmeier.  I didn't get the name of the seller I bought the modern chair from.  The blanket was crocheted by Dorothy Stewart of Hickory Grove Studio. 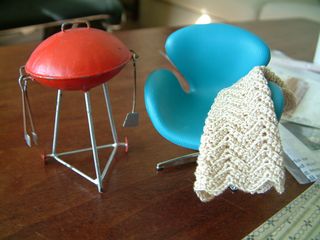 I bought some fine paper covered wire from Japan to make plants with, and some small scale fabric to upholster furniture with.  I also bought several 1:24 scale kits.  The box from Summerville Miniature Workshop contains a kit for a loveseat. I got a dahlia kit from Grapevine Miniatures.  I got several kits from Teresa's Miniature Creations...a screen door, trellis, garden bench, stove, cupboard, and rocking chair. 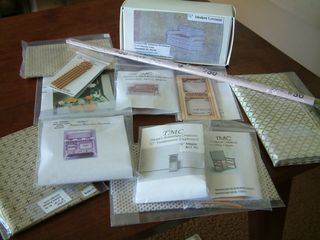 I purchased a piece of marble from Tres Beertema of Unicorna, from the Netherlands, which I will hopefully be able to use as a kitchen counter in the Bungalow.  I don't remember who I bought the corbels or three styles of tiny turnings from.  When I got home I found that the corbels are too big for what I intended to use them for, so they'll go in my stash to be used later. 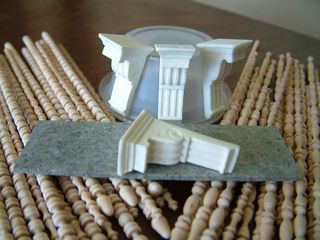 That's it, that's everything I bought.  Tomorrow I'll post pictures about the class I took.

I thought I recognized some of that fabric, but on second glance, no. Makes me wonder if you could use the one I was thinking of, though. I only have a five inch square, but I imagine that's a lot in 1/24 scale.

Those beer steins are awesome, all those pieces are.

Just now checking over your finds! Very nice stuff! I would be so overwhelmed to pick what to get!

Wow I have just spend a great time looking at all your buys. Fantastic collection of items. I could not pick what I like best so I can only imagine how hard it was for you lol. Enjoy all your wonders.
Hugs Maria

I really love all of your miniature shot haul. You made some great purchases. I can't what to see what you decide to do with them.