I took my husband shopping at my two favorite garden stores yesterday morning to buy some herbs.  He loves to cook with fresh herbs, so I left the small plot behind the garage, next to the back patio, for him (well, most if it anyway, there are a few perennials in there I couldn't move).

Anyway...the garden stores both had displays for fairy garden miniatures, apparently it's all the rage this year.  I didn't get any furniture because I wasn't sure of the scale, but I may go back for some after taking pictures of what I did buy in front of my half scale Chantilly.  If I go back I'll take my camera to the store with me.

I bought a bicycle, a shepard's hook, and a set of three thingys to hang from it, all wonderfully weathered and rusty...and two trios of clay pots.  The bicycle is too rough to pass as a miniature bicycle, I'll use it as garden art. 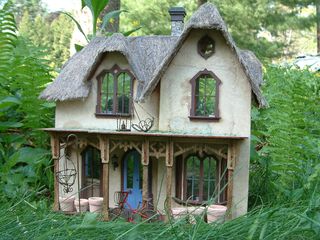 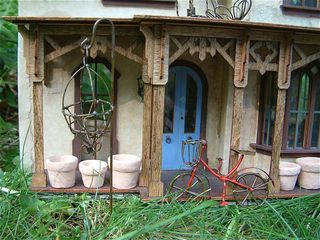 As long as I was outside with the camera I took a picture of the herb garden.  It's not much to see yet because the plants are small.  I had to cut back the left side of the clematis quite a bit to get the tomato cage in...it will fill back out. 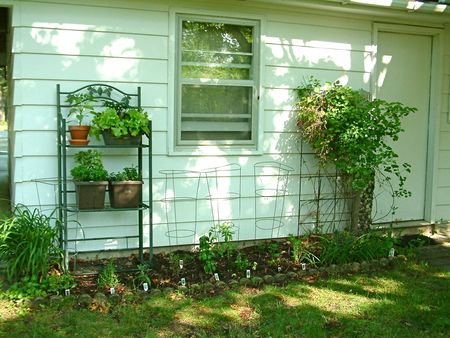 I put in a catnip plant in the corner next to the patio.  I don't cook, I just cater to the cat ;) 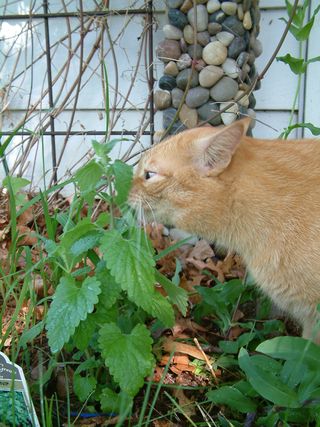 I got in some work on the Spring Fling contest kit yesterday too...

I discovered first thing in the morning that my really cool origami-made pendant light, which is the main light in the structure, quit working.  I had to cut apart the origami shade to get to the lightbulb.  The connection looks good at the bulb and under the house, so I don't know what's wrong with it.  I tested the wiring before I buried it and it was fine...it worked last weekend after I finished the electrification!  Grrr...

I'm going to have my husband take a look at it, if he can't find something wrong that can be fixed I'm going to have to have a nonworking fixture, since the flange and post it hangs from are already attached to the ceiling.  I'll have to make a new shade, of course.  Then I'll have to come up with a different way to put a light in that side of the house...maybe an under-the-counter kitchen light or something.  At least I haven't finished the interior walls yet.

Then...I took a painted finial outside to put a second layer of high-gloss spray finish on it...and dropped it on the ground on my way back inside.    Since the gloss was still wet I tried to wash it off in the sink, but all I did was smear the sticky crud around.  I had to sand it back down to bare wood as best I could to start over.

I do believe I actually made negative progress yesterday, even considering all the other things I got done that went right.

I want to grow tomatoes next summer.

Dropping your mini is not funny, yet it made me laugh!

Getting a package ready to come your way. Hope you can use what I send along. Didnt have much of what I was looking for.

Don't you hate negative progress?!!! :[ Sorry you had SF problems. I'm sure if you squeeze that cute kitty a little and get some purrs, it will help.

Your Little house outside in the grass is SO Charming! I LOVE it!
Sorry you are having electrical difficulties :(
Hopefully you can get them working again!