The stove, sink and refrigerator are vintage 1:16 scale Lundby pieces.  The sink cabinet was painted, then I added new knobs (head pins) and a towel bar.  The refrigerator and stove retained their original finishes.  I made the butcher block counter and the trash can.

The tiles on the wall turned out fantastically, it's just what I pictured in my head when I started...it's one of my favorite parts of this build.  I punched the 1/4" by 1/8" tiles from paint sample cards, glued them one by one to a piece of white cardstock, then sealed with several coats of semi-gloss polyurethane.  I did not grout them...I did a few tests with different grouting materials on a scrap piece and found I didn't like the way it looked. 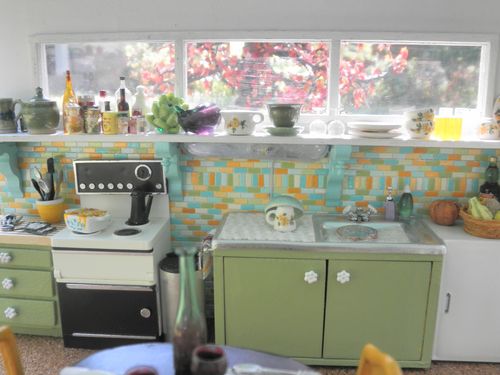 An in-progress picture of tiling...the pieces of plastic were used as spacers between the tiles. 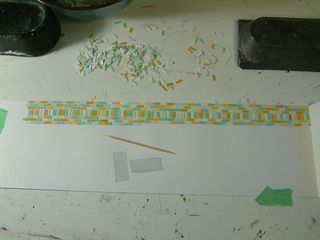 The light fixture was added after the fact, so the wiring runs on top of the wall instead of behind, which isn't unrealistic, I suppose.  The bulb was originally in the origami light fixture over the dining room table, but I broke the wires finishing the ceiling...I cut the bulb off, added new wire, then used it here instead.

The soapy water in the sink is to disguise how shallow the sink is.  I intended to write a tutorial, as requested, but can't seem to duplicate the effect satisfactorily.  I made the soapy water with clear microbeads, a bit of white paint, and clear, glittery nail polish.

The soap dispenser and dishsoap bottle I made from beads.  The rest of the accessories were purchased inexpensively...most were picked up at the Bishop Show in April. 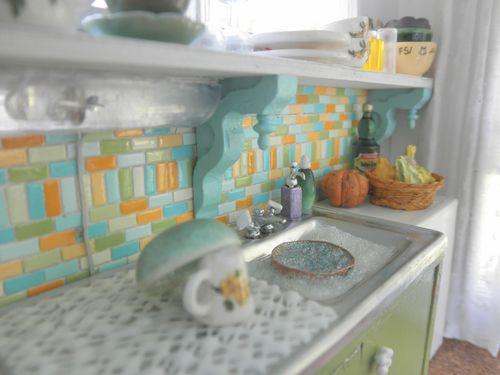 A picture of the origami light fixture when it worked.  I was very cross when I broke it. 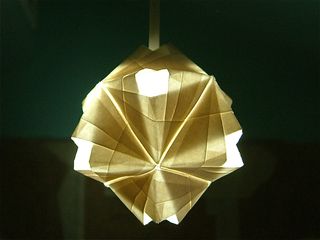 The casserole was made by Jan Patrie of Autumn Leaf Studio , the beer steins and cookie jar on the shelf were made by potter Jason Feltrope, the crocheted pot holders by Deb's Custom Crochet, and the fancy glass bottle to the right of the tall yellow glass bottle is by Gerd Felka, a glassblower from Germany.  All were purchased at the Bishop Show in April.  I made the towels and the wine cork...the decorative artichoke and eggplant are glass beads...the rest of the accessories are inexpensive mass produced pieces picked up here and there. 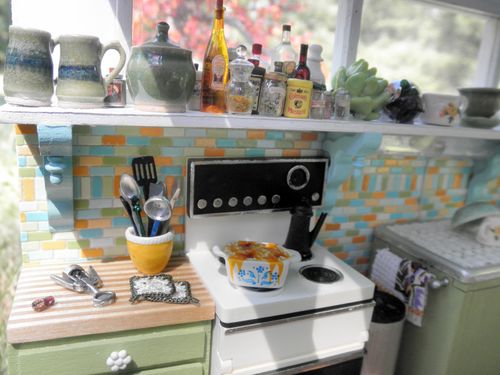 The table and chairs are vintage Lundy pieces, repainted and reupholstered.  The salad is from Crown Jewel Miniatures (I added the serving spoons, which are the ends of fancy toothpicks)...I made the salt shaker, pepper grinder, napkins and cork trivet...the rest of the accessories are inexpensive pieces from miscellaneous sources.  The wine glasses are plastic, but the wine bottle is glass...I used fingernail polish to fill them.

I was able to find smallish 1:12 scale accessories to go with the 1:16 furniture, but not smallish flatware.  I ended up cutting down cheap 1:12 scale flatware to fit with the place settings...they're still a bit too big but they don't dwarf the plates now. 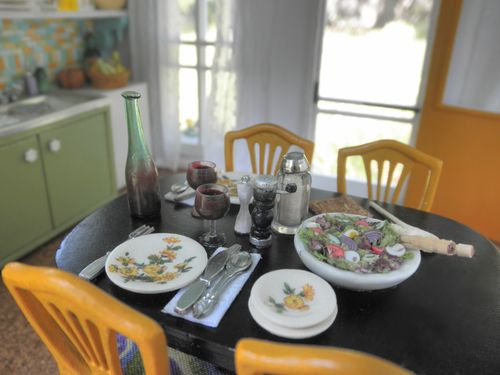 The mini tiles are wonderful! I am going to use this someday for certain! What punch did you use? I like them without added grout...seems to me they are in perfect scale and look grouted without the added material. I also like the wire from the light running on the outside...looks very realistic!

I bought the smallest rectangle punch with decent handles I could find at JoAnne's.

I love that casserole and of course, your tiling. I wish that I could see all of the entries.

As the others have said, Wow! you're tiles are wonderful! And I see them just in time for the kitchen I'm working on... I was looking for a way to do the backsplash, now, I think I have an idea!
Thank you!

The color choices you make are always my favorite part of your projects - it's uncanny how much realism is added by your knack of combining just the right shades together.
And the tiles... genius!

I really can't believe you didn't win. You were in my top 3 picks for sure. That tile work is brilliant and stunning. Fantastic job!!!