My project is titled Michigan Lake Cottage; it was inspired by the beautiful Grand Traverse Bay area, which I am lucky to call home.

The solar panel on the roof of the cottage powers the lights; there are two basement window wells on the side of the house which aren't visible in the pictures, which are lit and look fantastic in the dark.  The solar panel, LED lights and their mechanics are from a disassembled yard light; the circuit board and battery are under the house, accessed through the bottom of the base.  The light fixtures were made from scratch.

The tiling in the kitchen was done by hand, the 1/4" by 1/8" tiles were punched from paint sample cards.  The 3/4" scale furniture is refinished vintage Lundy, with the exception of the modern chair, which I purchased and sized down, and the tables and plant-stands in the living room and the butcher block cabinet in the kitchen, which I built.  I also made the tree, as well as all the shrubbery, flowers and houseplants; most of the flowers and houseplants were assembled from kits, a few were made from scratch.  I whittled the split rail fence from a fallen branch, the brick walk and the brick on the foundation were made with egg cartons, the gate was fashioned from strips of leftover wood, and the fire pit from a candleholder.  The fire pit was actually set ablaze in order to give the logs inside a proper charred look.

Because of the large windows I cut into the front of the house and the sun room made from the greenhouse addition, I fashioned a back wall for the cottage to keep one from seeing all the way through the house.  The back wall is held on with magnets. 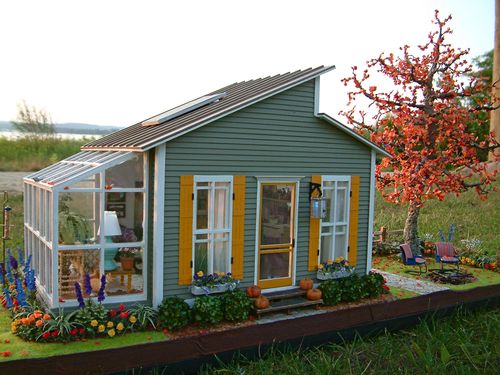 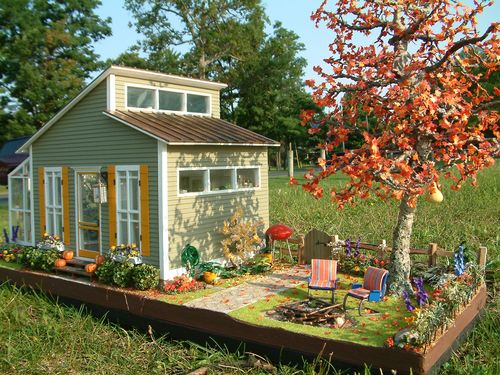 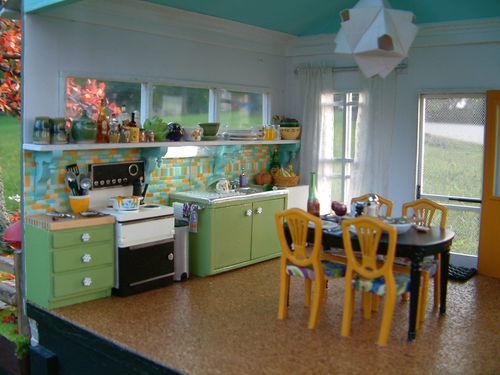 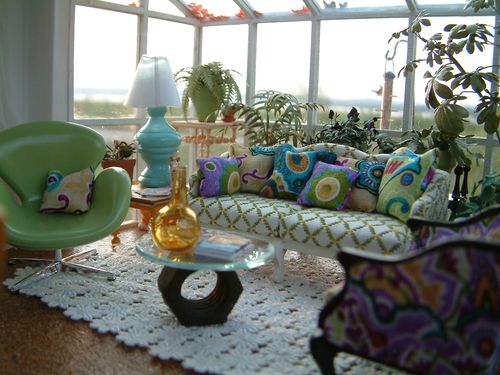 Oh my goodness! This is beautiful! I love the colors you've chosen. The tree is amazing! The photo of the sun room with the sofa and pillows is so beautiful! I want to move in right now! Congratulations! Well done!!!

Wow! Great work!
I especially love the eclectic cushions and chairs in the living room area, not to mention the tiles in the kitchen! And what about all the exterior details! Wow, again! :-)

There are so many great touches in every corner. The colors, landscaping, just everything really makes me happy to ogle over :D

Wow, This is So Beautiful! And it looks so REAL!!!
I Love the solar panel idea!!! And all your tiny details are so Perfect!!! Please show more close-ups! I Love it that you actually lit the fire in the fire pit!! BRAVO!!!

Oh, yes, I forgot to praise your solar panel usage on the Greenleaf forum! Awesome idea! I just love your build - makes me long for an autumn vacation.

And, thank you for compiling the list of entries again this year! :D

Your color choices are perfect - such a comfy looking home!

Really excellent work. I love the screen door. The outdoor plants and landscape is truly impressive. LOVE that tree. Hats off!

The detail is amazing. I really thought this was a "tiny house" to live in!!

I ADORE this tiny house. I would totally model a real house after it!

I love your tiny house it's beautiful something that I would love to have in the future. I was recently disabled and I'm now living with family member something that we talked about all the time how can I get a tiny house if I'm on disability. Love it love it

That is so cute, love the beachy colors. A perfect place for a picnic with out the bugs. Does it have a bedroom?