I did it.  I finished before the end of September.  Now it's ready to photograph this weekend, provided I can get that done early this morning, before it starts to rain.

The plastic candles in the chandelier were cut in half to shorten them, set on fire, and a black metal wick inserted while the plastic was melted.  It looks much better.

I added a shade on one side of the porch and made a citronella candle, so the bugs don't pester Sheila when she comes to visit.

Since I had an abstract oil and a drawn-on canvas that didn't work out for Mr. Neat's easel I put them in the studio, rather than the trash can.  I glued a piece of trim to the wall for a quick shelf, then sat the painting on it to dry.  The unpainted canvas I leaned against the wall behind the bag of sketch pads.

I also tacked some sketches to the wall behind Ms. Messy's easel, per Susan's suggestion.  Two I colored with pencils, since there is a tin of colored pencils with the drawing pad on the table next to her wicker chair. 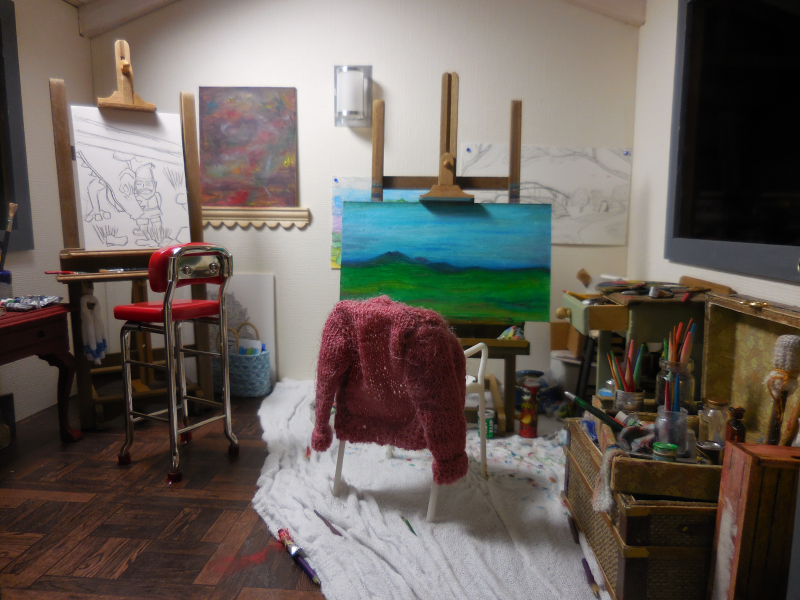 Love the sketches! They look gorgeous, and they're the perfect touch instead of just the wall sconce. The colors on the abstract oil are beautiful. Nice contrast with the wall.

The candles in the chandelier look so much better! Like the artists have been living there for a while. And I promise not to complain about the bugs when I visit!

I love how it all looks and congratulations on being finished so soon!

Love, love, love it! So much fun, and you "finished" with so much time to spare. That word is in quotes because I know you'll add a dozen more fantastic touches because your creative mind is never "DONE"!

It looks GREAT! I'm glad I didn't go further with my initial idea of doing more of an art studio because your's is so perfect! Mine wouldn't have come close! I love all the details! Makes me want to paint!

I've seen your work Blake, and would love to see your version of a studio. It would be spectacular in its own way.

OMG I love it!!!!!!! It's been far too long since I've stopped by to see what you're up to. I'm drooling and will be back later to catch up on it all. XXXXOOOO

I love love love it! That landscape just pops with color, but still blends perfectly with the neater side.
Love the candles now, and the citronella candle makes me want to come visit that front porch, since the mosquitoes wouldn't dare bite me now.

But you know most of all, that sketch makes my tummy hurt from laughing.
You are amazing!! This is your best work yet!