Before we moved the washer and dryer back I had Matt buy and hang a couple of ready-to-install unfinished cabinets to replace the shallow open shelves that were there previously, which I had hung a curtain in front of so I didn't have to look at cleaning supplies.  There was a shelf high on the wall opposite the back door where seldom used large pots were kept, which I gleefully eliminated when the pots were relocated to the top of the new cabinets.

I also relocated Ester's food dishes, which sat on the floor in this area and Had to be stepped around when I did laundry.  She now has a "breakfast bar" on the bottom shelf of the microwave stand.  She has shown no opinion about it. 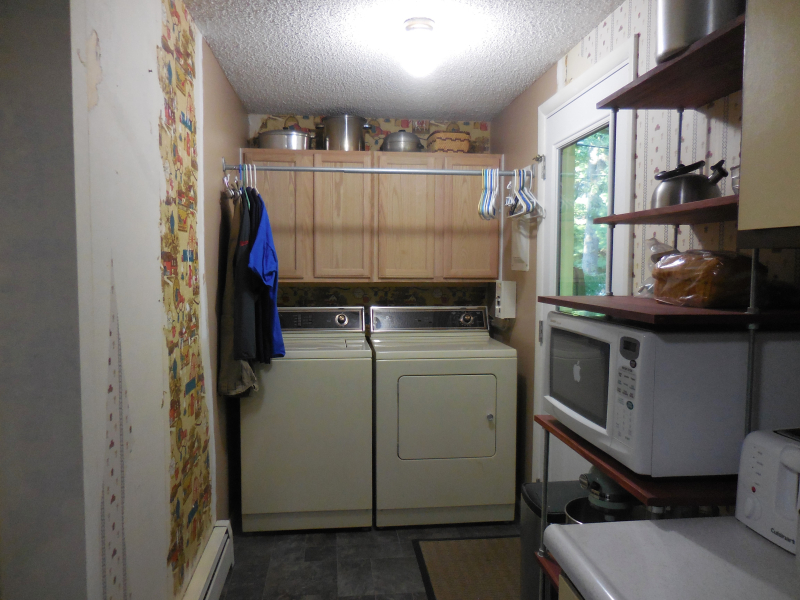 I left the 1970 wallpaper in place on the wall behind the appliances.  I am going to paint the cupboards the same beige as I am painting the walls.  I may paint the bit of back wall above the cupboards beige too, I haven't decided yet.

I had planned to paint the walls a light gray before the new flooring was installed, while I could still use the old flooring as a drop cloth.  I'm glad I didn't.  After the new flooring was in I knew gray walls would be too much gray.  I took some leftover carpet and vinyl to the paint store to pick out a new neutral....Benjamin Moore's Hillsborough Beige.

After much back and forth we decided on new colors for the kitchen cabinetry. 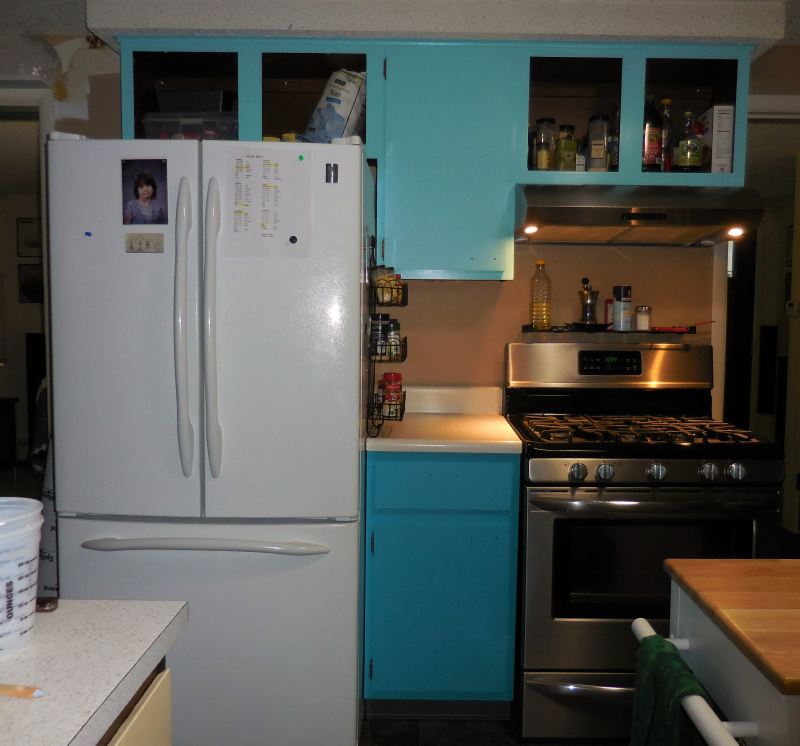 Matt wanted to paint just the doors, as had been done previously, but I think that's ugly.  I wanted to paint the doors and the boxes, but he thought one block of color would be ugly.  We reached agreement on painting the uppers and lowers different shades of teal.  I think we're both going to love it.  (I put just enough of the cupboard doors back on to show you the new colors, I'll put the rest on later.)

This is the other side of the kitchen...consider it a before picture... 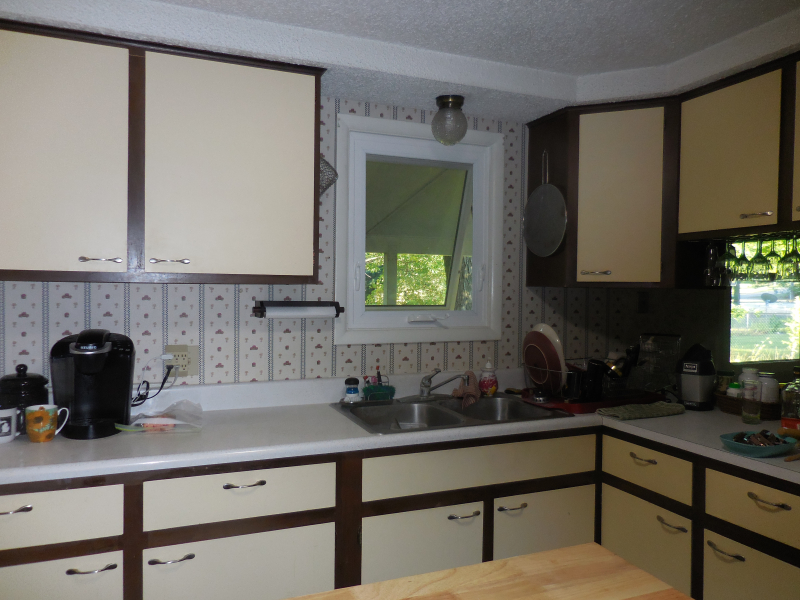 I was going to have the countertop replaced, but the original 1970 white with gold fleck laminate looks good with the new color scheme, and is still in great condition, so I'll leave it.  I am going to replace the sink and faucet though, because the faucet leaks at the base and there is a lot of ugly mineral build up that I can't clean off.

Notice, in that last picture, my new window.  My new windows and doors were installed over the course of the last two weeks.  I had the double-hung in the kitchen replaced with an awning window, so that I can reach to open it without standing on my tiptoes and stretching.  I love it. 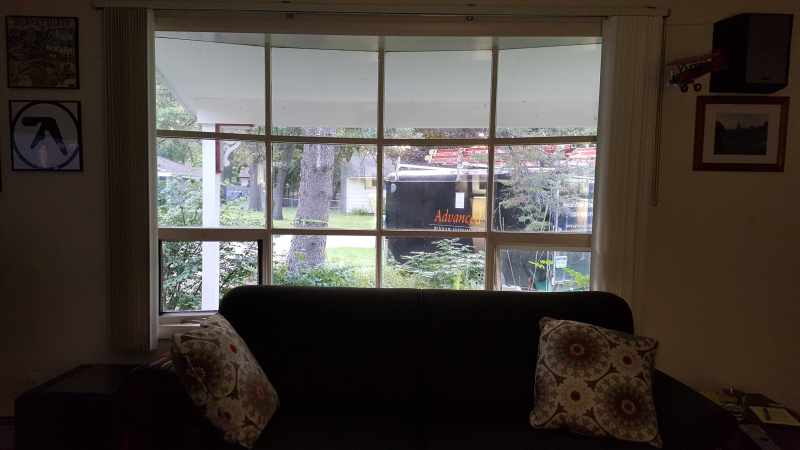 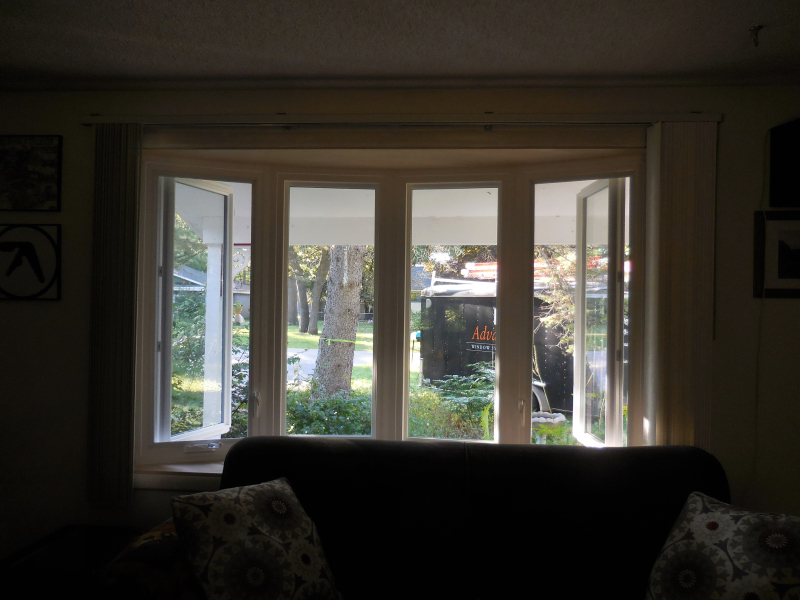 On the old window only the two lower, outermost, panes opened (well, only one did, because the other was broken), now I have full casement windows on each side.  Yay!

It was discovered when pulling the old windows and doors out, that while most of the windows were original to the 1970 build, the bow window and the doors had been replaced at some point.  The bow window wasn't screwed in!  It was held in place by a balancing act and the nails in the trim.  When I think of the number of times I kneeled on the base of it and leaned on it to wash it....I could very easily have landed outside in the garden, cut to pieces.  There was a one inch gap on either side of the window that was not insulated, and a slew of old mouse nests above it.  Neither of the doors were sealed, which explains why I had yellowjackets building a nest in the back door threshold a few years ago.  Yikes!  The new windows and doors are so well secured and insulated that our boiler is now setting off the smoke detector when it comes on (we're getting some cold nights already).  We need to add a vent from the furnace closet to the outside since we're sealed up now and have created a vacuum.  Apparently the heating guy should have installed that vent when we got the new boiler a few years ago, to bring us up to code, but....

What I like best about the new windows is that now I can't hear cars drive by, or the young girl across the street playing (she's a screamer).  I can't wait to see what my electric and gas bills are this winter.

We ordered the new front door with a window at the top.  It lets in a surprising amount of light into the front entry.  I love the color.  Winterberry.  It matches wonderfully, coincidentally, my husband's leather chair.  The new back door has a larger window than the old, letting more light into my laundry area.

I eliminated the storm doors, aka screen doors.  It freaked Ester out.  She wouldn't go through the new doorway, I had to carry her out the first time.  She's used to it now. 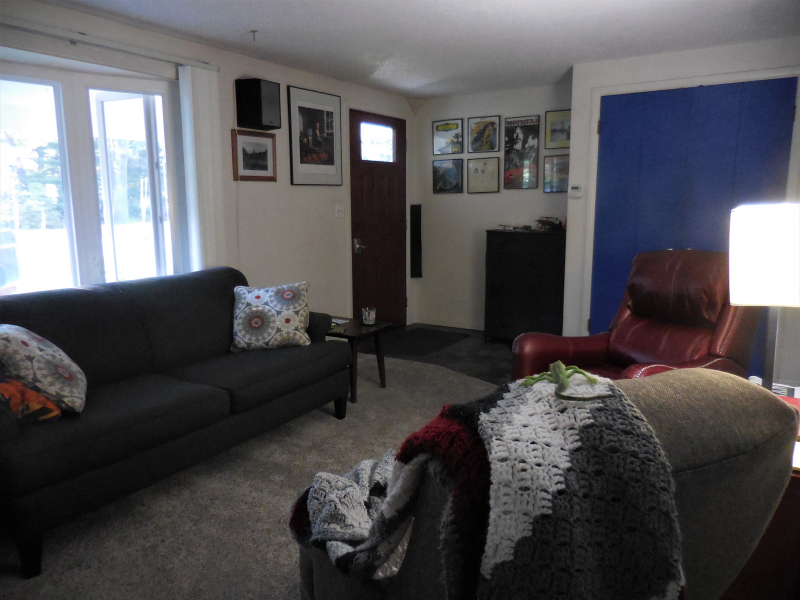 The new carpeting looks solid gray in the picture, but is really a mix of cream, tan and gray fibers.

Next on the reno to-do list is to paint the rest of the kitchen cupboards, purchase new cabinet handles, replace the blue closet doors in the living room (the new flooring has created a gap at the bottom of the doors), and finish stripping wallpaper and painting the walls.  I also have to call the roofer to see if he has a date in mind yet.

Oh!  I splurged on the latest model roomba.  I named him Bob.  Bob cleans under my sofa, under the beds and dressers....I love Bob.  Ester hates Bob, but she'll have to deal with it.

Love love love all the new colors, especially the teal cabinets and winterberry front door! And the new windows! Blocking out the screamer makes them pay for themselves!

Oh wow! Your heating bills are going to be so much lower!

Poor Ester. Change is a terrible thing to kitties. Nothing smells the same or looks the same and now her doors are gone? I'm surprised she doesn't need kitty Xanax.

Love your kitchen cabinets. Reminds me of your Tropical Beach House. We're planning a move in a couple years so we're stuck with boring neutrals for now.

I LOVE your new renovations Keli and particularly your new windows. They should make an enormous difference to your heating bills this winter as well as cut down on the outside noise. I also like the windowed front door and the light that it brings into the entry.
The cosmetic changes regarding your new paint choices and your re-use and re-organization of your laundry room are Great; and all are Very Clever ways to maximize efficiency and visually expand those compact areas !

Wow Keli! You must be feeling great with all the renos that have been done - there is so much satisfaction in these things. When we got our laudry fitted out a few years after we'd built, we just kept going in there to marvel at the beautiful beautiful floor to ceiling cupboards. Of course we are now at the point where we need to redo a fair few things. Anyway, I LOVE your new windows. These are exactly what we want but don't want to deal with having to move all our crap out of the way for someone to install them and then put all the architraves back on and patch up paint. Did you have a lot of that to do or were they pretty neat?

I used a company which does their own installation and doesn't sub-contract it out, to maintain quality control. It cost more, but was worth every penny. They were extremely neat perfectionists.

The replacement windows were custom made to fit into the existing openings. He installed them from outside, flush with my existing interior trim. The only interior trim that to come off was around the bow window and the doors, but he put it back up then put paintable caulk over the nail holes. He cut and installed new exterior trim on site. The whole team were wonderful to work with....or watch work, rather, all I had to do was unlock the garage door each morning so he could plug in his extension cord. He even cut a new board to fit under the in-window air conditioner.

I have to do a bit of touch up painting on the trim, and paint the inside top/bottom/sides of the bow window, which we ordered unfinished so that I could paint it to match our existing trim. That's it!

I love the new color scheme. You're going to have a bright cheerful kitchen. :)

Kudos for reusing your cabinets and counters. So many people just rip stuff out and replace with new lesser quality stuff because it's faster and easier without giving thought to whether they really need to. We did get new cabinets when we remodeled our kitchen but only because the layout was awful and we expanded the space into the neighboring dining room.

I'm soooo jealous you got a roomba. I've been wanting one for a while but am skeptical about how well they really work. I'd ask if you like yours but it's obvious. LOL. Keep us updated on his performance please.

Did you consider painting your laundry cabinets the same color as your kitchen cabinets?

I did consider that. I decided I'd rather have the laundry area recede into the background, so don't want the pop of color there. I am going to give them the same pulls as the kitchen cupboards.