I did not get the landscaping done yesterday.  Dry time was not my friend.  I did get the sidewalk installed, though I made it from cork I had in my stash instead of the linoleum scrap I found in my basement, as I had planned on, because the linoleum was too brittle.  The cork got a couple coats of polyurethane to keep it from crumbling.  I glued down soil/mulch (out-of-date cold-brew tea) and made a little pumice thing around the trio of rocks in front, which I hated.   April's birdbath isn't as tall as necessary to compete with the plantings, so I glued it to a wooden plinth, which I hated.   If I weren't under a deadline I'd order either a matching plinth or a taller birdbath, but at this point in the game I have to make due with what I have.  I also got the rest of the large foundation plants installed, which, though you can't see in the picture, line the foundation on the two sides as well. 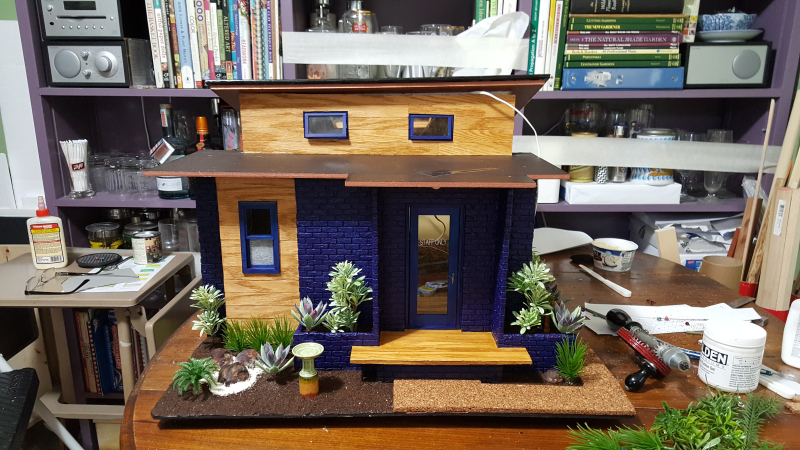 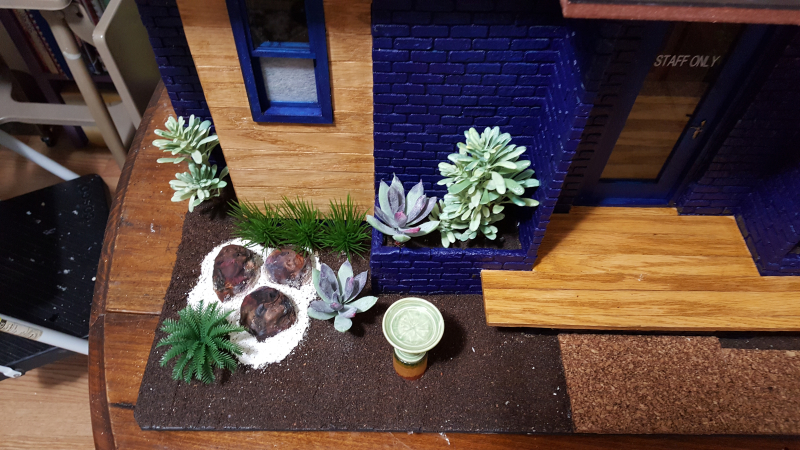 While I was waiting for glue to dry I colored the electric and gas meters while thinking through how best to install them.  I'm planning to cut wooden blocks to fit them over (they have an open back), glue the blocks to the building, then the meters over the blocks. This morning I covered the yucky white pumice area with soil, and put a coat of gray paint on the wooden plinth so that it will look like concrete instead.  I also sorted through my remaining supply of plants.  By the time I get home from work tonight glue and paint will have dried, I can give the landscape a good vacuuming, then glue down the rest of the plants. 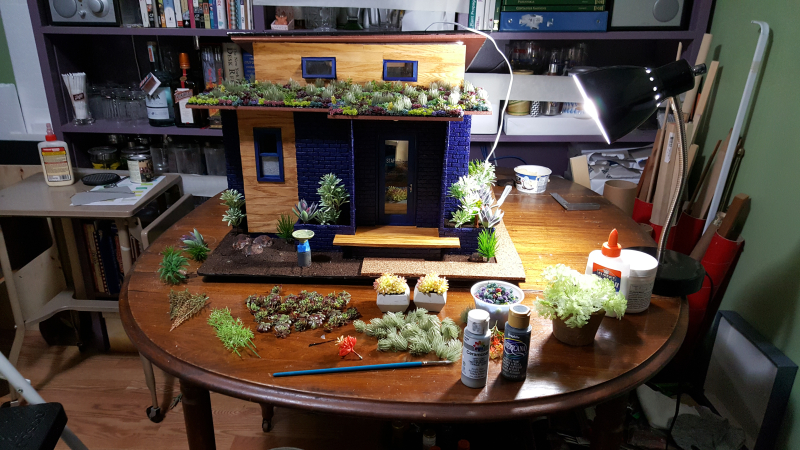 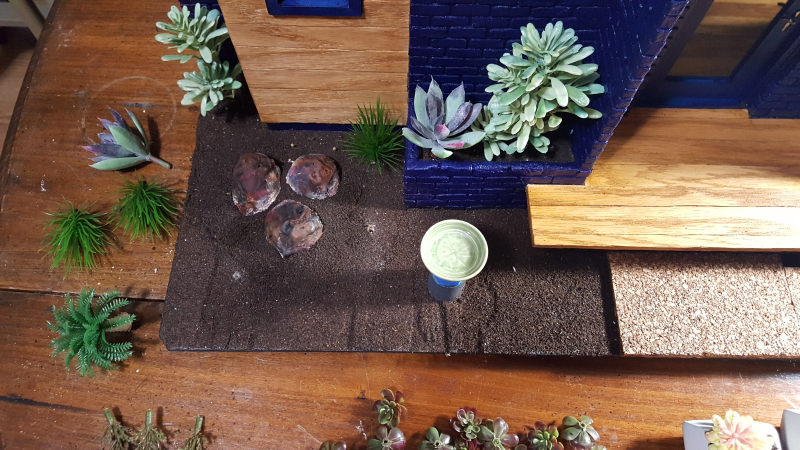 I like the birdbath plinth! I kind of miss the white rocks - I liked that contrast with the rocks, but the plants will add enough. And now I'm regretting not peeking in your basement... what kind of treasures are down there?

I liked the contrast too, but it was so bright it took focus away from the building entrance. I'm going to plant that spot the same way I planted the roof.

What's in my basement? Lots of empty boxes for expensive stuff we might have to send in for warranty repair some day, including boxes for stuff we don't even own anymore. Leftover dried up paint cans, leftover wallpaper, and leftover linoleum, from the previous inhabitants. A zillion spiders. Holiday decorations. The teapot collection I moved into the house with but never had room to display. All the baby blankets and layettes that were crocheted for Kate by her grandmothers, that I will hopefully pass on to her when/if she has a baby. All the Nancy Drew books I had as a kid that Kate never took an interest in. A coffee table, some unused shelves, and a couple of old lamps. I think that's about it.

Could you put some plants around the base of the birdbath to cover the base?

I'm thinking about it. Depends on how the "cement" plinth turns out.

Hi Keli, I can imagine you are not having much time to relax at present. So much to do in so little time.
You can do it
All the best Janine