The Chantilly has been sitting on my bookcase, close to done, since 2011.  I was talking to another miniaturist last week, also working on a Chantilly, about how I need to finish it.  I took it off the shelf to clean the dust out of it, in preparation for Susan's visit, then..... 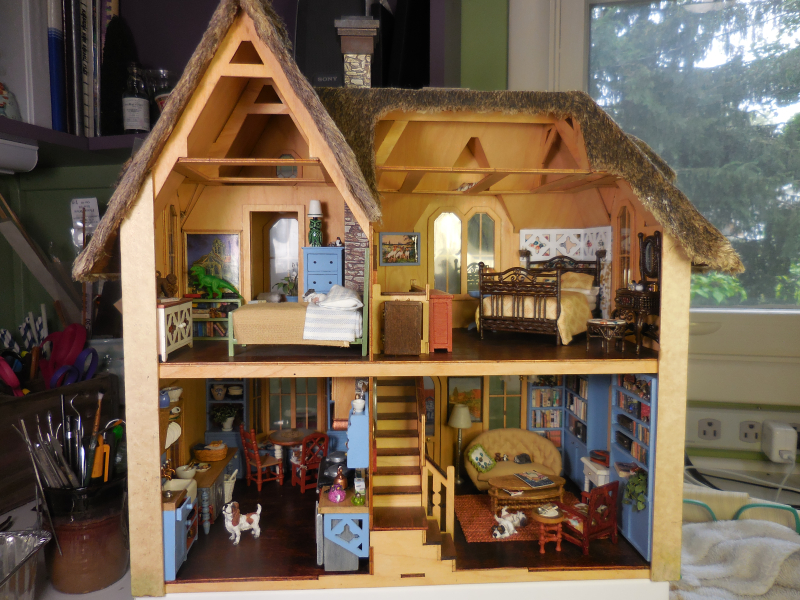 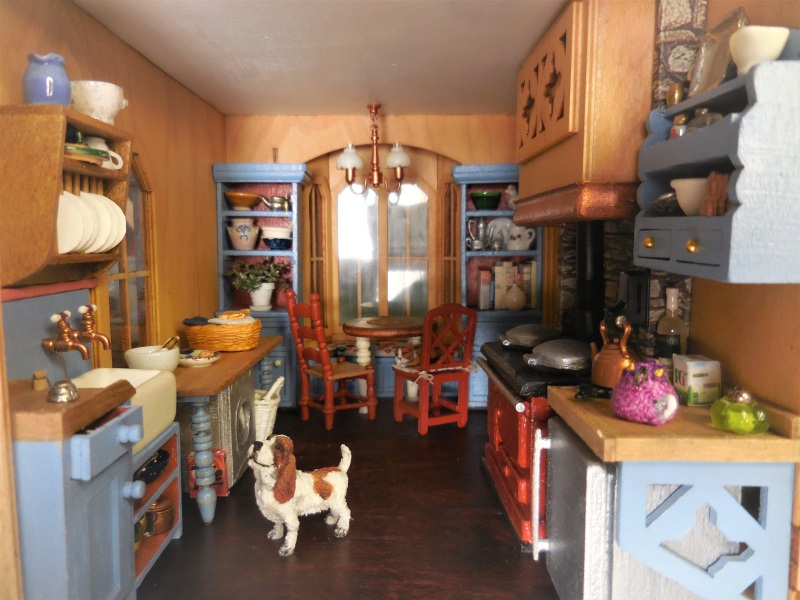 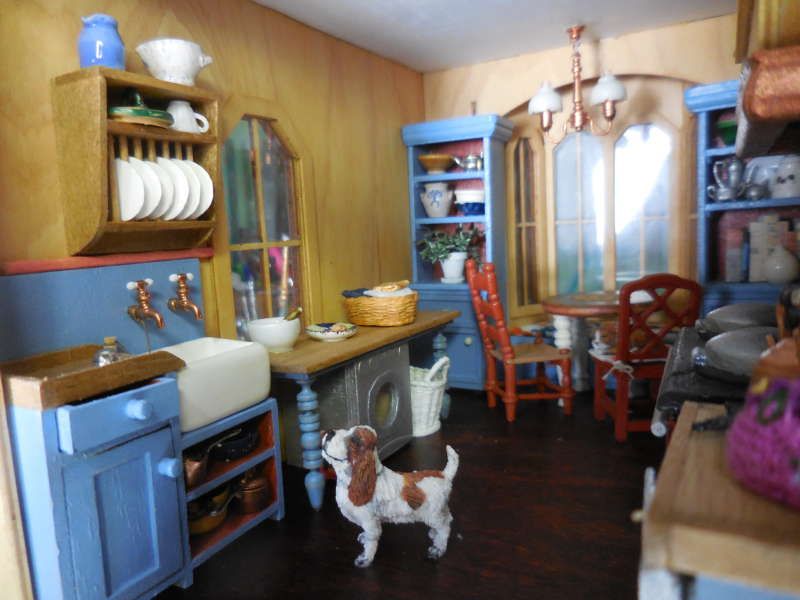 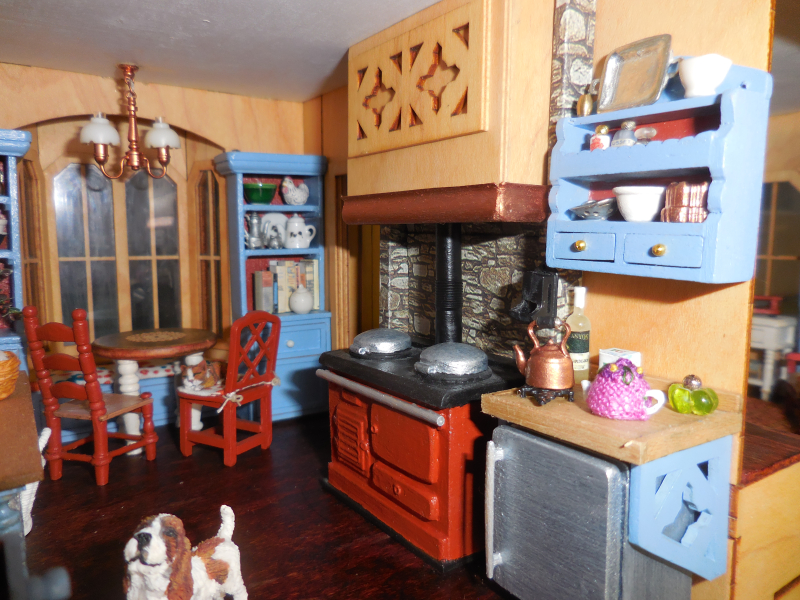 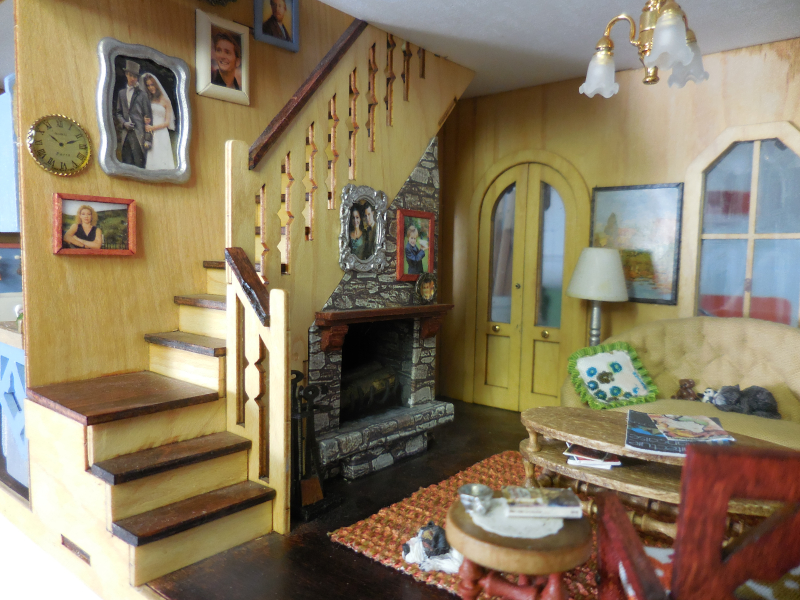 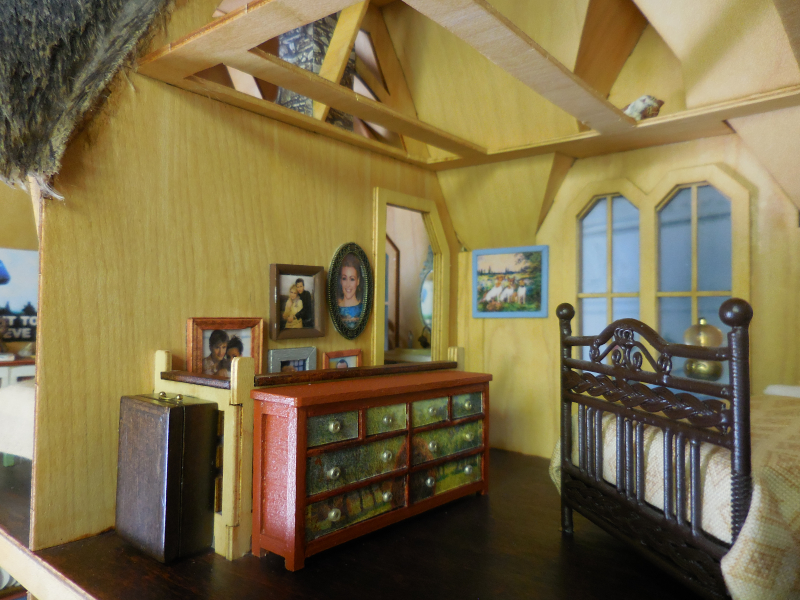 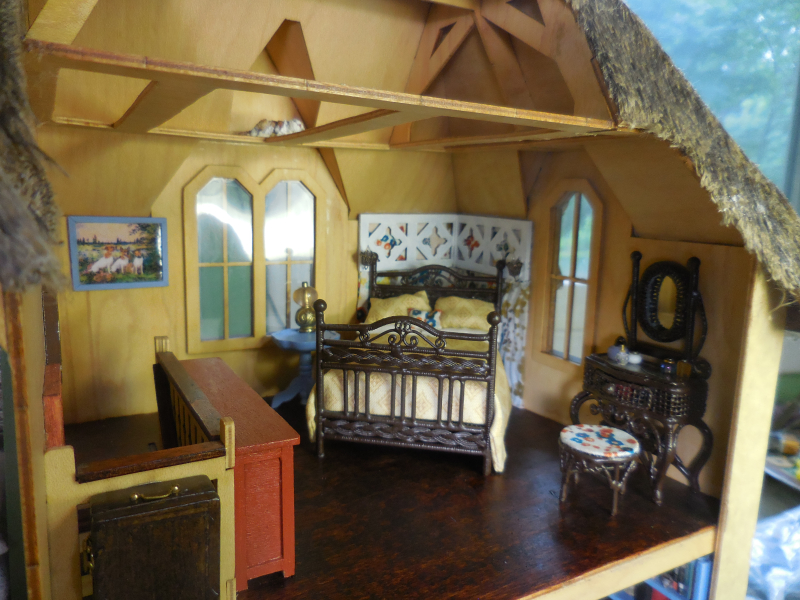 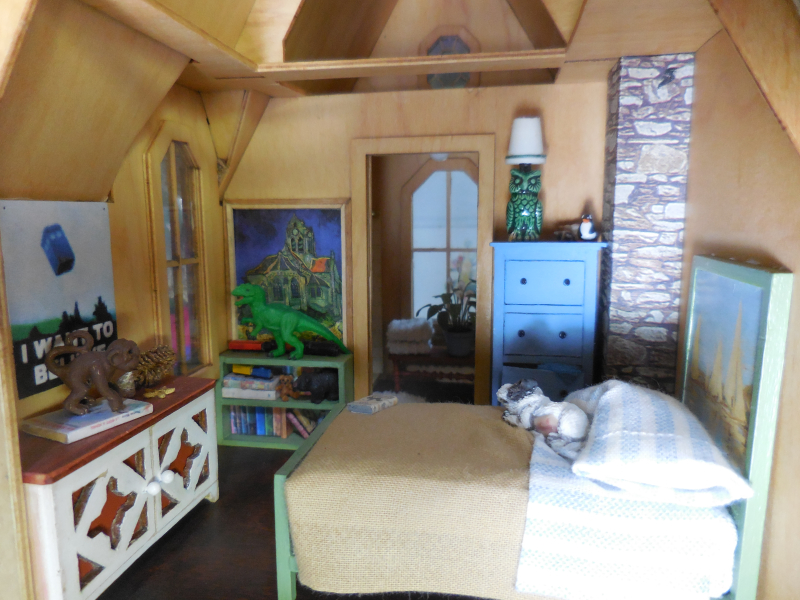 A family has moved into the half scale Chantilly. 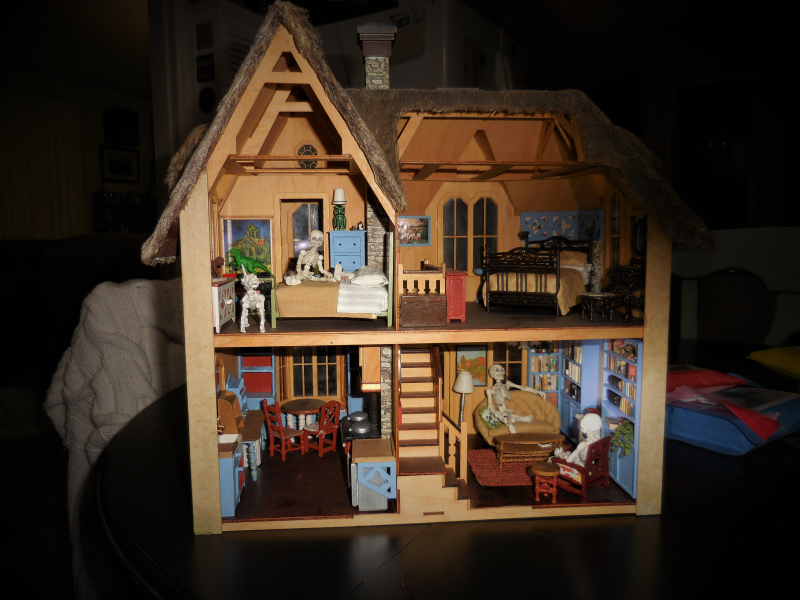 I've not finished that house though, the kitchen is bare, and it's been neglected so long it's filled with dust.  They decided to vacation in the Tropical Beach House while I put the Chantilly back on my work table. 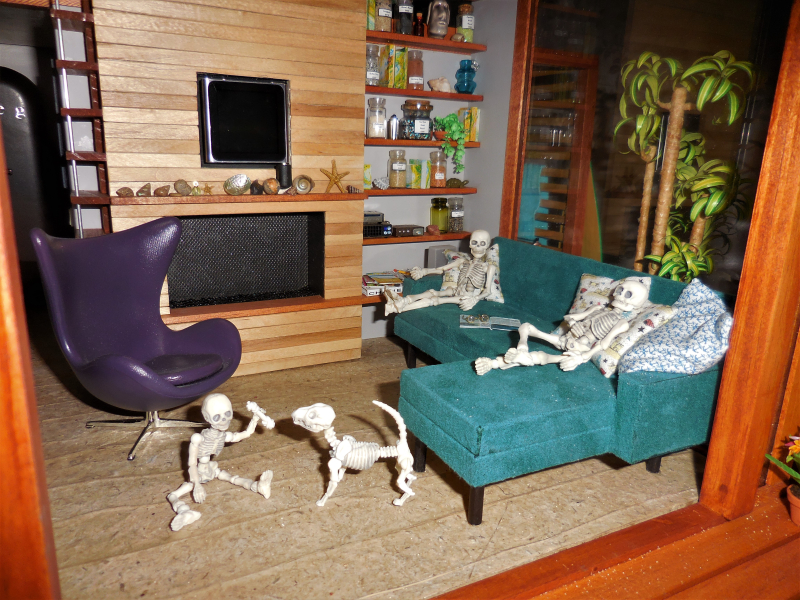 Mom didn't take too kindly to my playing paparazzi... 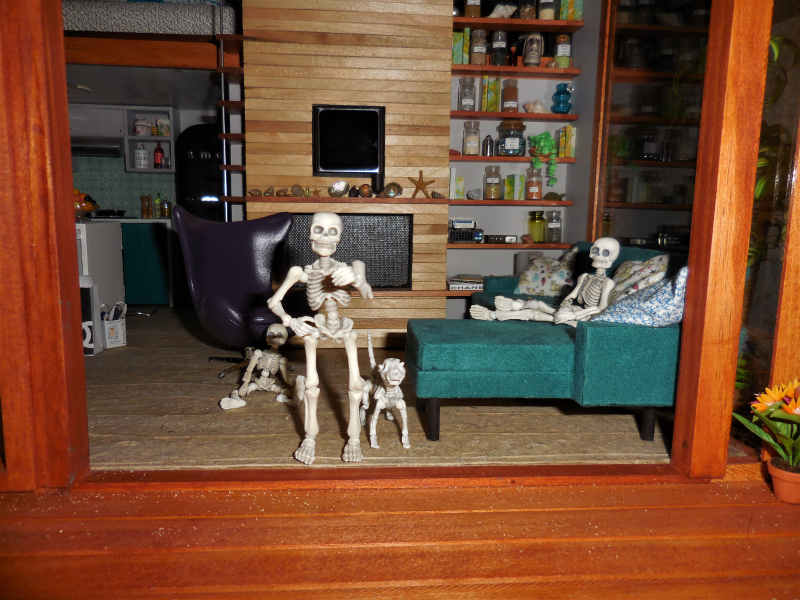 They are from the Pose Skeleton set, by Re-ment, available lots of places (I got them from Amazon).

Posted at 06:13 AM in Chantilly, Tropical Beach House | Permalink | Comments (7)

a picture for Susan 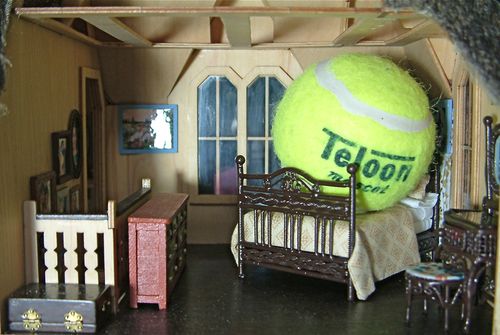 working on the bedroom

I wanted to use the leftover pieces from the widow's railing I didn't install to make a folding screen to sit behind the headboard, in order to hide the join where the wall and ceiling come together.  I couldn't get it to work, the pieces were too wide.  In retrospect I should have continued with the folding screen idea using a different material, but I was stuck on using the railing pieces because I've already worked some into the other rooms.  I ended up with this... 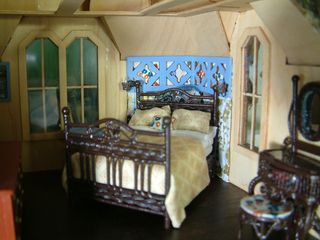 I'm stuck with it because it's already glued in place, so am hoping that if I scatter a few blue accessories to move the viewer's eye around the room that it won't be so powerful a focal point.  I might try getting back there with a paintbrush to change the color to an unobtrusive white...I'm debating the risk of making things worse vs. learning to live with it.  Or maybe it would look more purposeful with a pelmet...

The brown things on the sides are sconces.  I made them using wire, jewelry findings and the lightbulbs I pulled out of the chandelier Audra gave me.  They turned out okay, but with the bed in place they look odd...their color is too close to that of the bed and they sit at the same height as the top of the headboard posts, which makes it a bit confusing to the eye.  I may paint the sconces too. 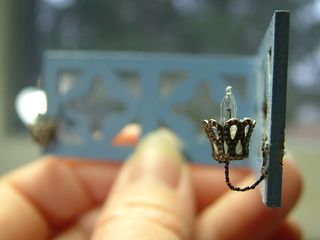 all the furniture is done

I made an end table and coffee table from tiny turnings last night. They need to be either painted or stained yet.  I'll do that tonight.

I love tiny turnings...I need to buy more when I'm in Chicago next month. 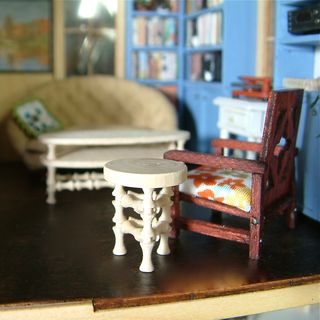 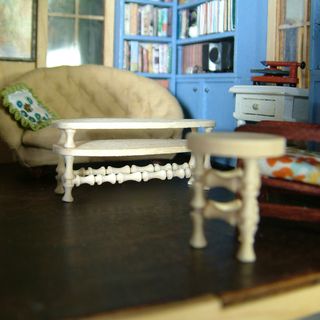 I'm now done with all of the furniture I need to finish the Chantilly.  I need to make a desk chair and plant stand for the Fairfield, then I can finish accessorizing both houses.

On a side note...I miss Google Friend Connect...I miss lots of readers, and comments....my visitor statistics have dropped significantly...I feel a bit lonely.

I'll have to think of something nice to do as a give-away for those of you still hanging in there with me...in multiple scales, since I know not many of you work in half scale, like I do....maybe a custom build....hmm.....  Suggestions are welcome, if you've got one.

the living room chair is a difficult little snot

I got the pins and holes done in each piece, but couldn't get them assembled together without making a mess.  Pins pushed through, wood split, I swore a lot, it was a disaster.  Eventually I pulled most of the pins out in a big frustrated snit.  I ended up gluing it together with new, longer, headed pins which are pushed all the way through the pieces and are visible....except for the arms, those went on fine with hidden pins. 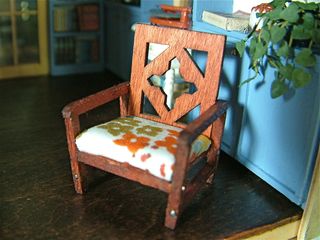 It's a bit crooked, but it's together and it's not horrible.  I'd start over with new pieces on a different day, fresh with renewed optimism that a second try would be easier...but I'm weary and cynical, so I won't, I'll use this as is.

I got a great deal on ebay on some old Tootsie Toy furniture, some of which is broken (hence the great deal).

The chairs all sit higher than my other half scale miniatures.  I thought I could just cut a bit off the bottom of the legs, but the metal is very brittle, and I ended up snapping the legs of the first chair I tried it on into pieces.  I also broke a little piece of the seat off.

I used a piece of one of the legs I snapped off to repair the other broken legged chair, then sanded the legless base down to accept newly built wooden legs. 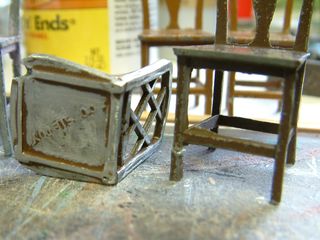 I used pins, glue and many curse words to hold a new base together... 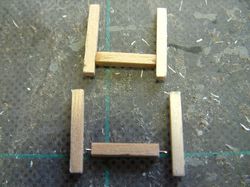 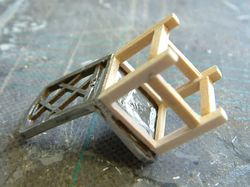 ...then gave it a coat of paint and a seat pad.  Whallah, new chair! 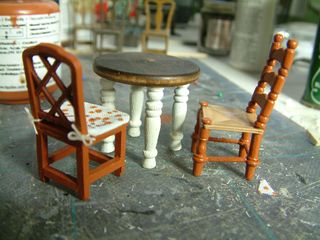 I also made the table...I used pins and glue to put legs cut from some 1/12 scale railing I'm never going to use onto a wooden circle.  The top of the table is darker than I wanted, it really soaked up the stain...but it's not so dark that I can't live with it. 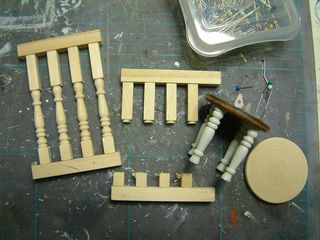 While I was waiting for glue to dry I cut and stained pieces to make a chair for the living room.  Provided I've planned and measured correctly these bits of wood will look like a piece of furniture tomorrow. 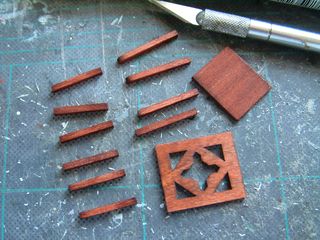 I made some time to play in my studio yesterday...it felt nice.  I'm sure that today I will regret not having gone into the office, as I had planned, but I really needed some 'me time'.

I worked on what needs to be done before I can fill the rest of the rooms with furniture.

I put doorknobs on the front door.  I used brass Houseworks knobs on the interior, but made my own pulls for the exterior from jump rings and crimp beads.  I glued them in the middle of the doors, as I observed on my trip to France, rather than on the edges of the door, like we do in the U.S.  Doorknobs have a keyhole in the middle, but pulls do not, so I mounted a keyhole for a lock a little higher on the door (it's another crimp bead, flattened a bit with a hammer).

I also glued the carraige lamp in place.  I didn't like the look of the tall narrow light bulb, so I replaced it with a crystal bead, since the lamp isn't wired to electricity and is just decorative. 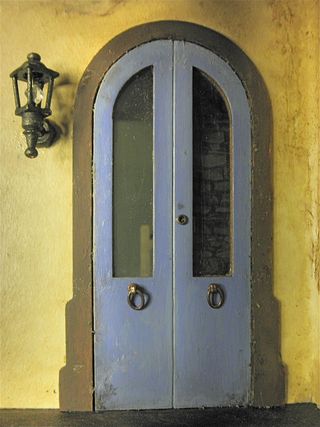 After the door was completed I began on the artwork.  I came to the conclusion that I definitely need to procure a pair of angle cutters, as working with the miter box and saw to make all the picture frames became quite tedious.

All of the pictures except for those in the stairwell have been glued in place to cover where the tabs and slots of the walls come together. 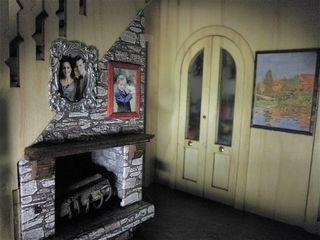 I'm still deciding on placement for the pictures in the stairwell.  I've got to crowd them together to cover a long tab (which is under the top of the white framed and bottom of the blue framed picture).  I'm not necessarily opposed to having them that close together, but it means I need to frame a few more...and I need to decide if I want to add another row at the top, to make them come up higher on the second story wall. 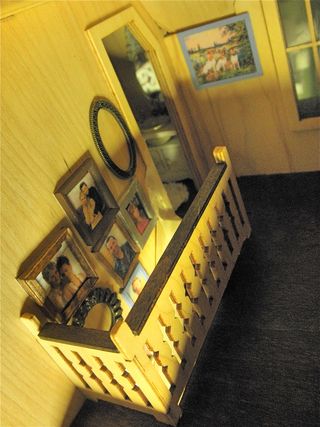 Ignore the piece of wood taped along the top of the stairs, it's a spacer to ensure the bottom row of pictures are hung at the same height from the steps.

Also....sorry the colors are a bit off in the pictures, I had to use my little camera instead of my big one.

a better picture of the bookcase

A close-up of the bookcase, as requested.  It required some tricky though the window lighting, as my camera blocked the whole open side of the room trying to get the lens into the back corner.  I couldn't get everything in focus, so focused on what wasn't visible in yesterday's pictures.

What is sitting behind the dinosaur is a toy train.  In retrospect I see I should have saved it for a different project where it can sit closer to the viewer, it's hard to see the detail now that it's placed so far back in the room. 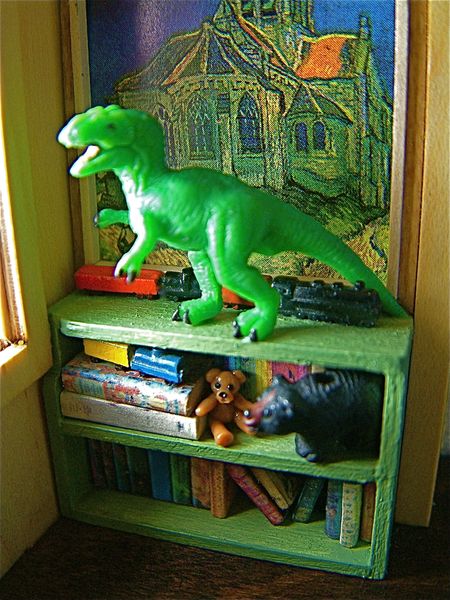 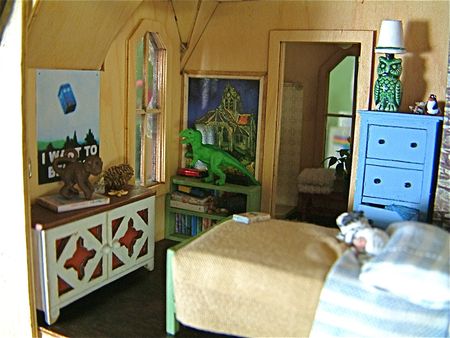 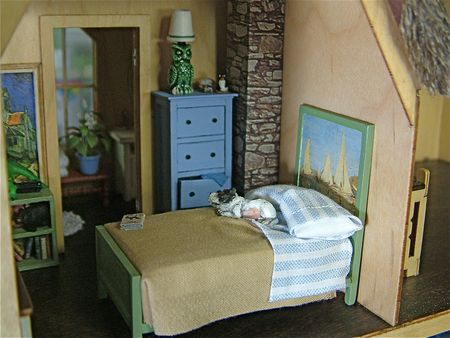